I didn’t take photography seriously until I went totally blind. I was trained in sculpture and industrial design. I have always been a visual person and planned to study architecture at Yale, but then I started to lose my sight. A doctor coolly told me I had Retinitis Pigmentosa and left the room without further comment. While listening to Dr. Dean Edell, on a San Francisco TV network, I learned I would go completely blind. A caller asked about RP. I remember the doctor’s words; they hit me like a hammer. “A person with RP gradually looses their sight until they go completely blind.“ There is currently no cure for RP.


It took me two years to recover and figure out what to do. I was a carpenter at the time. I did first-rate work. So I never needed to hunt for a job. None-the-less I worked very little, just enough to pay the rent and for food. My girlfriend, Amy, stood by me during this difficult time. Amy and I were engaged. I worried about the future. At one point I laid out charts graphing the loss of vision over time for her. I told Amy if she left me after we married I wouldn’t hold it against her. She stuck it out. In June we will be married 26 years. Thank you Amy. 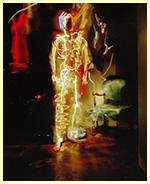 Wingwall suffers from retinitis pigmentosa, a hereditary degenerative disease of the eye. After all but losing her perception of light a number of years ago, Wingwall discovered that a great deal of her experience of vision happens in her mind. The brain is capable of representing line, color and perspective even without the help of eyesight.

She rarely photographs all alone -- she asks colleagues, including her husband, architect Donlyn Lyndon, to look through her lens and describe what they see. During this collaborative process, she describes her "mind's eye" image and asks if the camera captures this view, using her deep store of memory for other comparison points.

Along with her memory, Wingwall relies to a great degree on her other senses in making her photographs. She may feel the heat of the sun in order to get a sense of the strength and direction of the light source, and she may similarly sense the reflected light radiating from her subject.

Wingwall often uses auto-focus cameras to capture images. In addition, she uses an array of lenses intended to capture her failing sight. Although a 50-millimeter lens renders an image close to what the human eye sees, Wingwall is fond of using wider lenses and panoramic cameras that warp the image and represent her newfound inner vision of the world.

Several of Wingwall's photographs deal with her experience of working as a visual artist without the aid of sight. Many of her works feature architecture -- one of her favorite subjects -- superimposed with images of her guide dog, Slater, or his predecessor, Joseph. These images highlight the ways in which her negotiation of the world around her is now mediated through another being, and the intimate relationship that that establishes between her and her dogs. 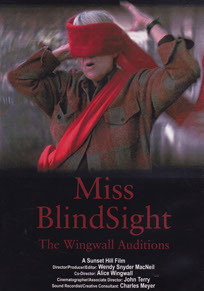